You are WOLFGUN - an ornery, rage-filled werewolf on the set of a bad horror movie. Hordes of undead ghouls wielding knives have broken into the studio and want you dead, and it doesn't look like they're part of the crew.

You were already annoyed having to do this lousy job, but now you're pissed! 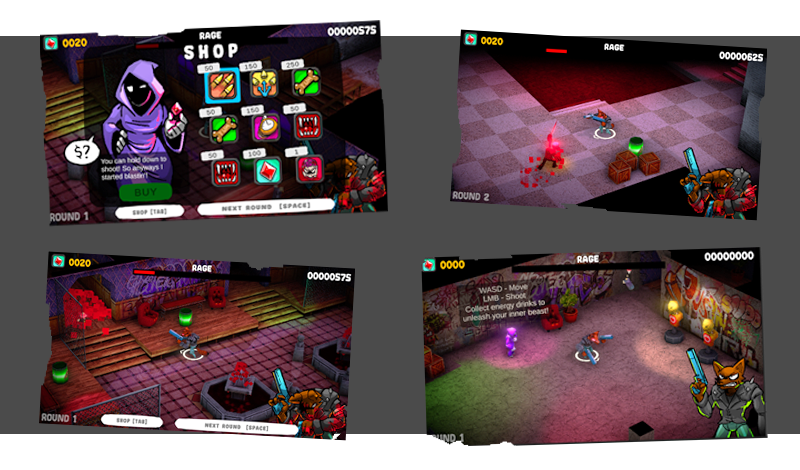 Trudge your way through the creepy haunted set and studio back alleys, blast your way through waves of vicious minions, and keep your bloodlust at its peak by collecting the BEAST ENERGY™ cans scattered around.

While you're at it, pocket enough shiny gems and maybe you'll even be able to buy yourself a nice upgrade or two from the alluring shopkeeper's cache of goodies... 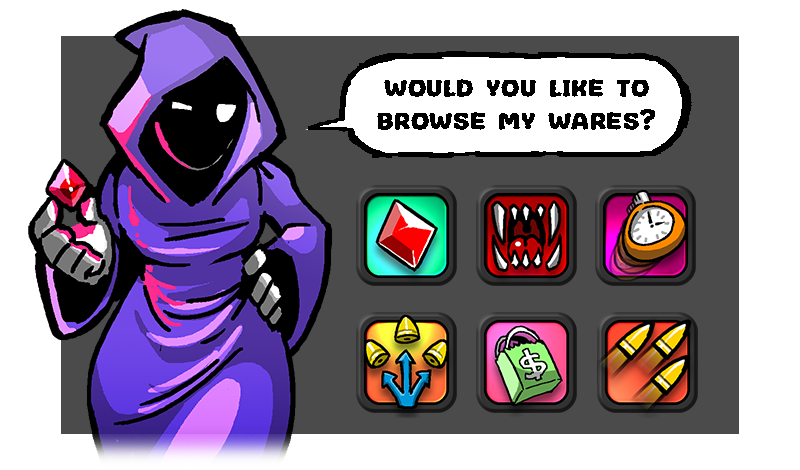 Whatever it takes, stay alive, and stay angry. You are WOLFGUN.

WOLFGUN is a project that was developed in ~72 hours for Ludum Dare 49 by three people. If you enjoyed the game, please rate us on the LD page!

The controls are simple, the presentation is neat and the shooting feels good! However, I didn't feel like playing any more after the sixth or seventh waves, as by that point I felt like I had seen eveything the game had to offer. More enemy variety would be a first step toward a more engaging game! Also, I suggest removing blood or giving the option to turn it off, as it causes huge FPS drops, and disabling spawns near the player to prevent mindless spawnkilling - or, alternatively, making the enemies temporarily invincible but harmless upon spawning.

Hey QuakeRanger, thanks for checking the game out and providing some good feedback. If we decide to return to this project in the future, it'll definitely be a lot more polished and varied gameplay.

It would be cool if the guns were auto mode, it hurts having to click for each bullet. And sometimes the bullets don´t go where they are supposed to, like having a zombi in front, pointing the mouse directly on it and the bullets pass away. Also an inprovement would be pushing the character backwards and giving some frames of invencibility to avoid the weird to see situation of getting instakilled for 3 zombies. Anyways the upgrade system looks cool. Thanks.

The first upgrade you can get enables auto-fire

But it couldn´t be on the start? I don´t see the logic, players can already have the same rate of fire without getting the auto-fire, giving it on the start prevents getting handhurt. Mabye it can be balanced by reducing the normal rate of fire at the start, and increase it to the actual state in the upgrade. Thanks.

Edit: just played, got to round 20. geat game, really fun, even after playing for a while. I wish that you could limit/remove the blood though. really lagged the experience. great game overall though!

this was the best game I got to round 99

This is pretty good, but one recommendation I'm gonna make is that this needs to have a downloadable version for offline play.

This game is so cool, and well done, keep going! 😎

A couple of things I suggest as improvements are:

* Fix shoot-to-crosshair direction, my bullets aren't going through my crosshair, and this could be frustrating sometimes.

* Adds a sort of "invulnerability time" after being hit, sometimes you lose all your lives in a second, due to a lot of enemies around you.

* Improve UI in general, if you need an help, I'm a UI Developer and also a designer in my free time, I'll be happy to help you if you'd like to ;)

This is awesome that you three could make this in so little time. I think this could be developed further in a number of directions. Like, keeping with waves, like a Smash TV, which would mean more powerups. Or as I was playing it, I was thinking Devil May Cry, which would mean more exploration/story.  Whichever way you go with it, you have a really good start here. I liked both the 3D/2D artwork. The music/sound were good. Kind of a weird thing was happening when I was way up in waves where the music was muting and the sound of the guns was weird, like a thunderstorm, kind of cool in its own way. Also, the Rage could use improvement. Maybe change it so the player doesn't lose control with it and also add a cooldown after it expires. Overall, great job with the game!

Gave it a short LP, my god that shopkeepers' got curves

she got them there birthing hips x'D

Its impressive what you guys can do in so little time!

ABSOLUTELY AMAZING. Man, this game is awesome. I believe i got almost 100 waves and didnt died, i was just tired hahaha

So man... you can release this game, but you'll need to improve some things like more characters, more weapons, more maps and definitely more enemies for later waves. I had so much fun with this. Keep up the good work!

Hey SOTC- Thanks for playing, glad you enjoyed it so much you got to 100 waves! We didn't account for anyone getting that high, so everything breaks haha. We will definitely consider adding to it at some point, as there's a lot we could do with how basic it is now. Cheers!

That's insane haha. Testing it I only ever got up to around 16. I bet everything was so broken and all the audio was getting blown out by your gunshots.

Thanks for checking it out!

Oh yes! the audio got pretty broken at the end! haha

If you want to see the CHAOS! I put a time stamp where the game almost broke haha

Another sodaraptor's great work. And excellent like all the others he and the Haunted PS1 community have ever made. Fun, addictive and with excellent potential for more, much more. Congratulations for your work.

Thank you 5mg~ happy you enjoyed the game!

As per usual sodaraptor as provided the world with yet another masterpiece display of textures on lowpoly geometry.

I liked the game A LOT. But i have notes!

The shaking effect on the player character did not feel like “rage” so much as it felt like a visual glitch. The music loop was very short. The bullet noise variation was very small. The rage mechanic, while yes, IS unstable, it was also not even a part of the game beyond wave 5 after you’ve upgraded to to the point where it is no longer a problem. The enemies didn’t seem to scale at all. Not being able to shoot while holding down the mouse is fine except for how awful the shot speed was - this is why a lot of games avoid making the two inclusive and opt for a reload mechanic instead.

Again, super DUPER happy to see anything sodaraptor puts out. Been a huge fan since playing hynagogia and after seeing that he posted on itchio on the same jam as me I HAD to come and play it.

Hey Jerem- thanks for checking the game out and giving such detailed feedback. Our workflow is usually pretty lax during game jams with extremely tight deadlines such as LD, so some jankiness is expected. We opted to have the shot speed and other things lackluster when you start because you can upgrade those in the shop when you have enough money (one of the first things you can buy is an auto-fire upgrade). We felt like ramping you quickly into being OP early on just so you could experience everything sooner rather than later. If we ever had time and expanded on it, we'd definitely look into scaling and balancing as some of the first improvements. Thanks again for playing, glad you enjoyed it! 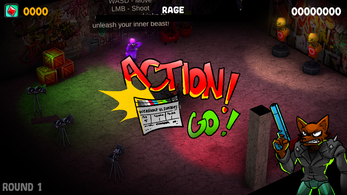 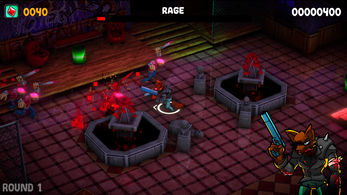 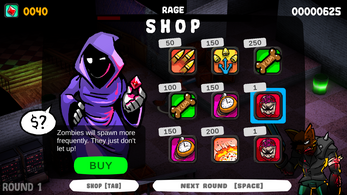