A downloadable game for Windows and Linux

You are Koss, a covert operations specialist skilled with tactics, evasion, and camouflage.

Terrorists known as the Red Hawks have taken over the GEKO Research Facility. With it, they have direct control over a massive array of nuclear weapons and plan to use them. It's up to you to infiltrate the facility, make your way through 8 different levels spread across varying environments, and remain cloaked in the shadows. 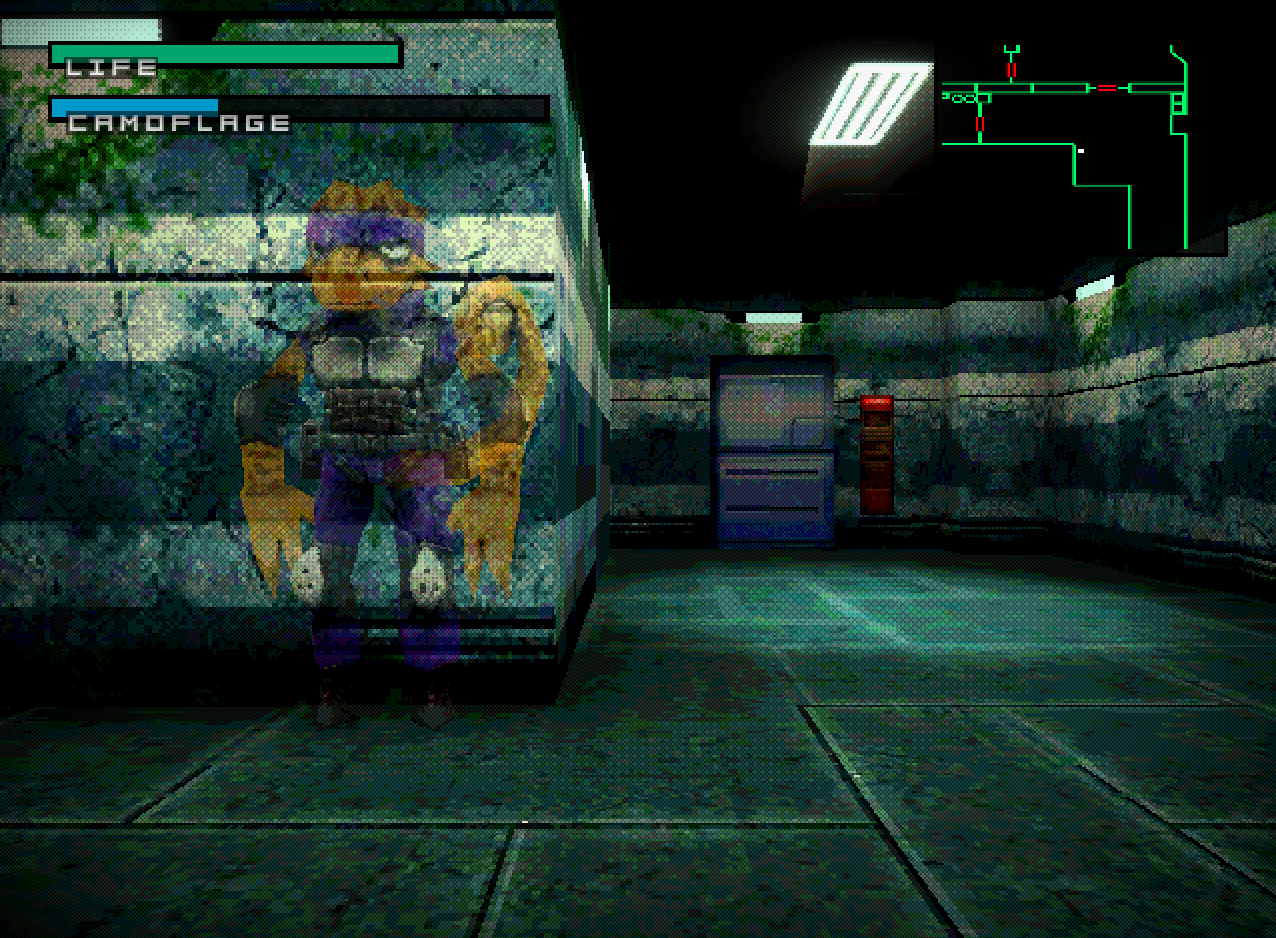 Covert Critter is an action-stealth game that pits you against various scenarios in which you must reach the end without being detected. Move swiftly! You are ranked by how long you take and how often you're discovered by the enemy.

Equipment is O.S.P. and you'll have an arsenal of gadgets and gizmos at your disposal. Boomboxes, recon drones, banana peels, and more will help give you the upper hand during the operation.

Use them and your gecko camouflage ability to evade your enemies and put a stop to the Red Hawks nuclear launch.

This is your role.

You are a Covert Critter.

Thanks for trying out our game Covert Critter! It was made by 2 people over the course of 12 days. We are two extremely passionate developers, who love retro stealth, 90's polygon aesthetic, and making our games the best they can be.

Wishlist us on Steam 🦎❗️

Great game, had a lot of fun playing =)

I love this so much!

Reminds me of Robbery Bob for mobile.

Wow. Looks amazing. Love MGS 😍 I will be playing this soon

This is actually quite cool!

Bro this game was sick! Love the retro vibes you give off with these games. I did play Pathogen X last year and had a blast with that as well!

awesome tribute to Metal Gear Solid, sodaraptor takes you back in time again to the PSX days.

Really fun! I’m going for the S Ranks now but it’s feeling pretty tough. Not 100% on it but on Sewers I didn’t enter the vision cones of the turret or guard, or alert the guard at all, and it still gave me an A. Tried a couple different approaches too but no dice. Is there a time I gotta hit to get S rank there?

Hi Naph- thanks for checking out the game! In the current version, all of the S ranks for levels 2-8 are bugged and not possible. We are preparing for another update soon that will include a few tweaks including fixes to the ranking system. Sorry!

No trouble! Thanks for your reply, looking forward to it!

it's all fun and games until your radar gets jammed...

For a game jam game made in 12 days, this is really nice! I think I'll actually go through and try to max out my score on this one bc I'm having a good time so far!

Super impressive that this was made in 12 days!! Kudos to you :)

Solid Snake but im a reptile

so you are a solid snek?

Hi sodaraptor does this work on 32 - bit

is there now a working mac version?

Hi Meow- not yet. We are prepping for a big new update soon that will include a working mac version.

Early next month if I'm able to get my hands on a Mac to get a proper build going.

I love your work! Metal Gear was the first game I thought needed to be its own movie as a 12 year old, so this brought back memories lol thanks!

terrible idea I have, but what if snake rival for Koss?

Also, good to know I was not the only one with the same idea. lol

Yo, that's a dope drawing! Yeah, a snake is the obvious first choice, but a lizard-type creature was too enticing to mix with a camouflage ability. Thanks for playing!

Any way to play this game in Windowed mode? I really want to stream it, but only have one monitor :(

Not at this time. In-game resolution settings will be coming soon in a future update though.

I saw the game trailer and thought it was awesome. but i have a problem: the game is just dark, it seems to be lacking textures.

Might be outdated drivers. Haven't seen anyone else mention this issue yet, try checking to see if you need to update either Windows or your graphics drivers.

they seem to be all up to date, but i´m using a quite old piece of hardware so that might be the problem

Ah, I see. Still not sure how low-end specs would cause visual/texture issues, but it's possible. Are you using integrated graphics or do you have a dedicated gpu?

Hey skuttie- thats awesome! Keep in mind the par times are super out of whack in the current build. Normally you would have gotten S in every level with those times. In an upcoming patch, we'll have everything corrected!

Good to know thanks

As a Metal Gear fan, I was really excited to see this announcement and you certainly didn't disappoint!

It's a very faithful fan game, everything from the graphic to even the controls feel like they've been pulled from the original MGS. Easily one of the best Indies I've played recently.

Bury me in the Corpo room. I've always been obsessed with the commander's room and seeing recreated so well made me happy. Would love any technical behind the scene on how you nailed the graphic so well.

How do I play this? I downloaded the mac download but it doesn't run.

hi Meow- yes, we are having some technical difficulties with the Mac build of the game. We're hoping to have it fixed in an update soon. Sorry for the inconvenience!

Amazing! I love the items and extra mechanics. You've raised the bar for jam made MGS-likes! ;0

Thanks! I'd be lying if I said we weren't a little inspired by Exfiltrator 🤘

Reply
ComfyCatboy192 days ago(+1)
This game was a TON of fun!! I'm a huge Metal Gear fan and this was an excellent love letter to the series! Bigtime kudos to the game creators!!
Reply
sodaraptor192 days ago

See, when he said that security was tight, he was talking about their sunglasses. Those birds were dripped out.

Very impressive for a game done in 12 days! The art is spot on with the MGS1 Aesthetic. Love the animals especially how Koss's tail moves around while he runs. The music also fit well into the universe.

I didn't see a reason to walk anywhere. Crouching was used to sneak and run for everything else.

It was really easy to cheese the ai. I could run up to them and just run in a circle dodging their bullets and they would stand there confused.

I didn't really use the drone - it felt easier and faster to run in through areas and just react to enemies as they saw me.

I felt like because of how short the enemies were knocked out - I had to move very quickly through the area (which may or may not be intended).

With the enemies doing so little damage - it felt easier to run through areas and take damage instead of placing traps.

The camo ability is very strong. Often I could just hide against a wall right as an enemy walked by. They were even pushing me but didn't detect me.

Overall great submission to the game jam. I look forward to your other creations.

Hi albird, thanks for the feedback. I agree with most of your points, especially regarding the AI, which we plan on improving. There's a lot of polish we intend to add! Cheers

Will modding be possible in the future? Like a small SDK for level creation?

Like what I'm seeing in the game, you guys did a good job

truely loved it i hope u guys keep making games

Hopefully there will be a sequel! Covert Critter 2: Sons Of Lizards. Game looks fantastic, can’t wait to play after work. 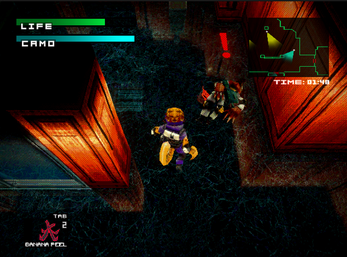 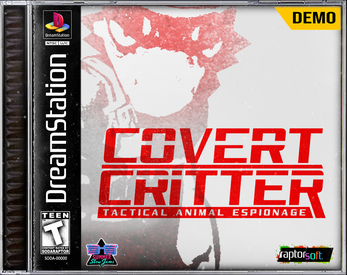